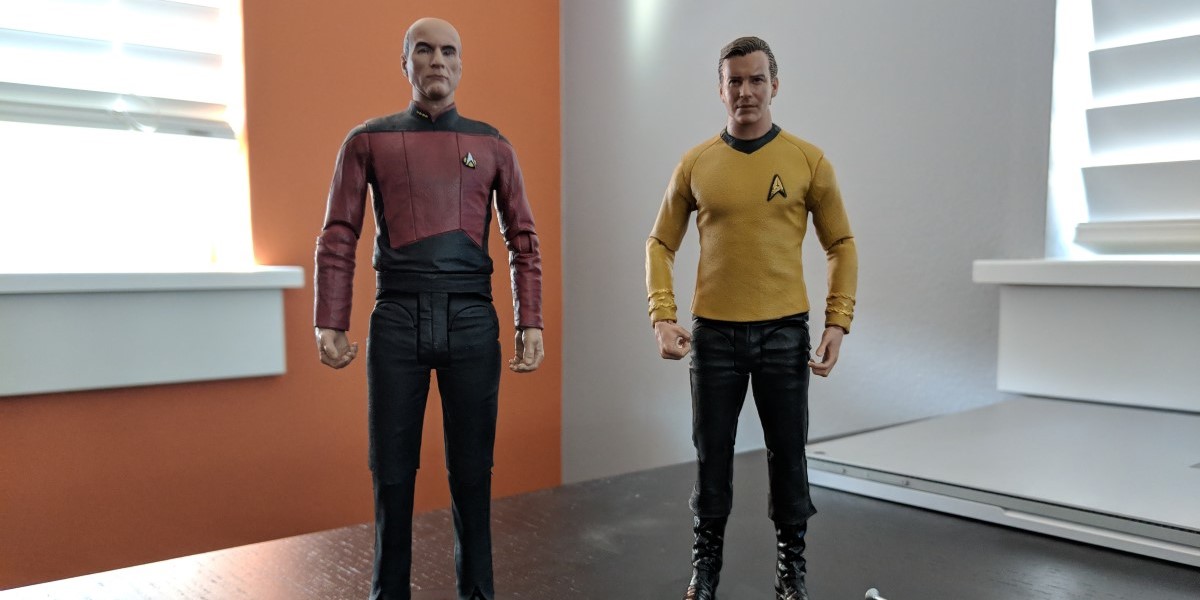 McFarlane Toys is kicking off a new series of 7-inch Star Trek action-figures starting with Captain Kirk and Captain Picard. These figures just hit stores and my figures arrived today. I collected all of Diamond Select’s Star Trek figures previously (and loved them) so I was naturally curious about what McFarlane’s versions would be like.

I’m going to cut to the chase: their Captain Kirk figure is amazing. So I’m not really going to talk about that figure much. But they really missed the ball on their Captain Picard figure. Details matter on figures I collect and they got a bunch of the details wrong which really disappointed me.

You can see that they didn’t do a good job getting Picard’s eyes quite right. The rest of his face seems quite a match. It’s his eyes that bug me. But my biggest problem is with the uniform they used for their Picard figure. During the third season of Star Trek: The Next Generation, they transitioned away from using the form-fitting one-piece uniforms seen in Season 1 and 2 and went with a two piece uniform which consisted of pants and shirt that unzipped in the back for all the male cast members (and other male supporting characters like Lt. Barclay). But during that transition, Picard’s uniform was a bit off during the first few episodes of the third season. You had these two seams that ran down the middle of his uniform shirt.

This weird uniform style for Picard was seen until the 6th episode of the third season called “Booby Trap”. In that episode – Picard has the uniform shirt that he will have for the remainder of the series.

So why did McFarlane Toys choose to model their Picard figure in a uniform style that was used in only 5 episodes of the third season rather than the more familiar uniform style he’s most recognizable in for the series?

The other issue is the back of the Picard figure is also not right. It includes no zipper seam going down the middle and the lines are not right.

The quality of these figures is great but its the detail that is lacking and as a collector, details really matter to me. The next two figures in the new McFarlane Toys Star Trek 7-inch action-figures series is Michael Burnham from Star Trek: Discovery and Spock from the Original Series. I’ll definitely be picking them up but I really do hope they pay special attention to getting the details right.