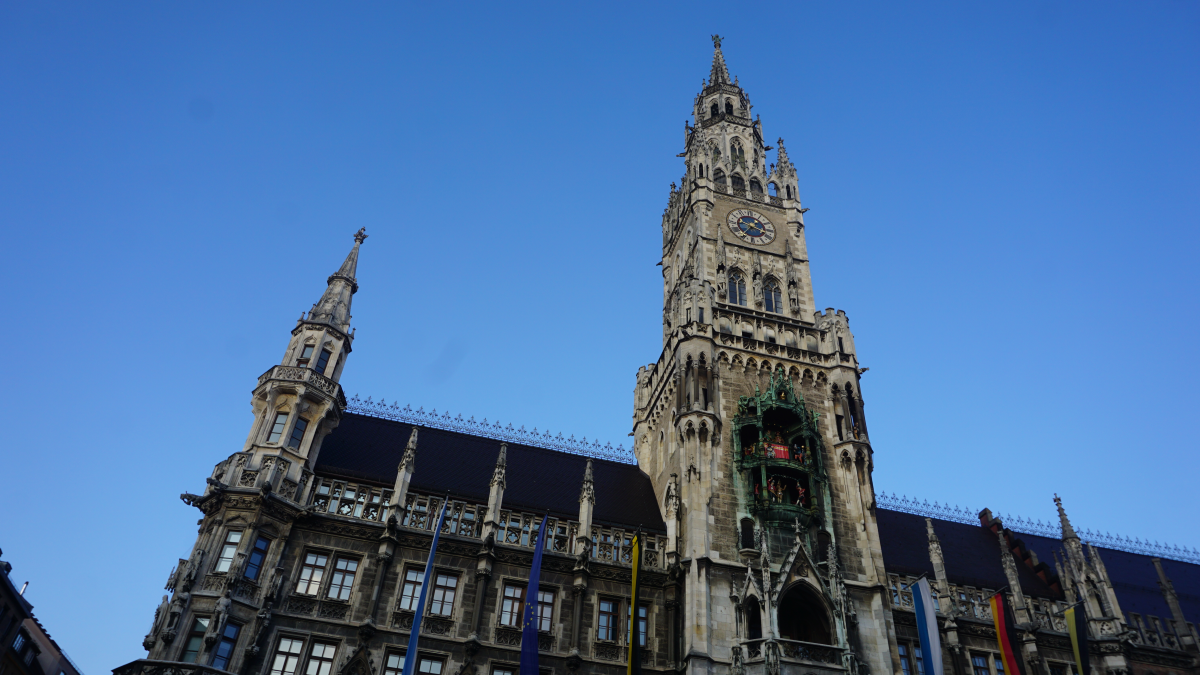 A little over a month ago, I went to Europe for the very first time for a work trip. And it was awesome. I decided to split blogging about my experience into two parts: part one for London and part 2 for Munich. Here is part 2!

Day 1 was mostly traveling from London to Munich which went pretty uneventful. We arrived in Munich in the early evening so it was dark. It was also very foggy which set the tone for most of visit in terms of weather. We flew Lufthansa so we arrived at Munich International Airport’s Terminal 2. Terminal 2 is the newest part of the airport and I was impressed by the modern design and décor. Customs went quickly and we grabbed an Uber to our hotel. Unfortunately what normally would have taken 25 minutes ended up being over an hour due to traffic. With the traffic and the fact they drive on the same side of the road as we do in the U.S., it felt a bit more familiar than when we arrived in London. By the time we got checked in to the hotel, it was late and we were hungry. So we hopped into another Uber and headed into Munich.

After seeing one of coolest-designed bus stops I had ever seen – we decided to eat at Wirtshaus Zur Brez’n where I had my first real taste of German brats! And some amazing German pretzels. And some beer. It was the perfect way to end the evening.

Upon waking up the next day, the fog continued to linger over Munich but I managed to see some of Munich’s Bavarian buildings from my hotel room. To be honest, the mix of fog, being chilly out, and the Bavarian architecture really made the fact I was in Germany a bit surreal to me. However, today was spent mostly at the Microsoft Munich office in meetings. (After all, this was a work trip!)

For Day 3, we spent half the day attending a small work conference and talking to local Microsoft employees. But early afternoon, we escaped to do some sightseeing! We went straight to Marienplatz. This was the main spot I wanted to see while in Munich. And thankfully the fog finally cleared! (But it was still cold!)

But first: we ate lunch at a small Italian restaurant called Ristorante Galleria and then headed to check out Hofbräuhaus. Hofbräuhaus was built in 1589 (almost 500 years ago!) as a brewery. In the late 1800’s, the brewery moved to a location just outside Munich but the beer hall remained where it is today.

After Hofbräuhaus – we were off to finally see Marienplatz! Marienplatz is city square in the center of Munich that originally held markets and tournaments in the Middle Ages. Today it is the site of modern retail as well as the site for the Old and New Town Halls. Marienplatz was buzzing with lots of people and the energy was incredible. I fell in love with a lot of the men’s fashion I saw – particularly I saw a lot of men wearing vests along with their button up shirts and jeans. The architecture was also incredible – specifically the New Town Hall.

Around the corner from the New Town Hall was the Cathedral of Our Dear Lady which looked to be under renovation. But the true surprise of Marienplatz was Saint Michael Church. Finished in 1597, the amount of detail inside the church was absolutely stunning. I had never been inside a church like this one. I recognize there are many older churches across Germany and Europe but this was the first time I stepped foot in a church older than the United States.

After Saint Michael Church, we continued to walk around as night fell. We visited a local comic book store which was interesting – although all the Batman comics were in German. We were due to head back to Hofbräuhaus for a Windows Insider meet-up but I was fighting jetlag and a cold and I was bummed to have to make the decision to skip the meet-up to get some rest. So I retuned to the hotel and literally passed out.

It was time to head home. After waking up early to get ready to head to the airport, Munich provided a amazing view of the sunrise which really made me smile (above photo).

We didn’t have a direct flight back home and had a 4 hour layover in Atlanta where I got lost after passing through customs. Other than that, the trip home was uneventful – but long.

Ok so jetlag is very real. I’ve gone to the U.S. east coast many times so I thought I understood jetlag. But in reality I had no idea. Flying during what is normally overnight for me to London helped make the first day or so in London manageable but my body had a hard time adjusting to such a big time difference and toward the middle of the week it hit me pretty hard. Our second to last night in Munich it hit me the hardest where it felt like I was fighting a cold and ended up missing our Insider meet-up to rest. That was a bummer. Next time I may have to take sleeping pills or something to force my body to adjust and sleep during the normal local time.

I am so grateful that work provided me with the chance to visit Europe and special thanks to Dona Sarkar for babysitting me during the trip and showing me around London. I was nervous but it was an amazing experience and can’t wait to go back. I’ll actually be heading back to London for Microsoft Ignite – The Tour at the end of February. I’m planning to stay a few extra days after the event to do some more sightseeing with a friend (shout out to Ioana who is awesome!).