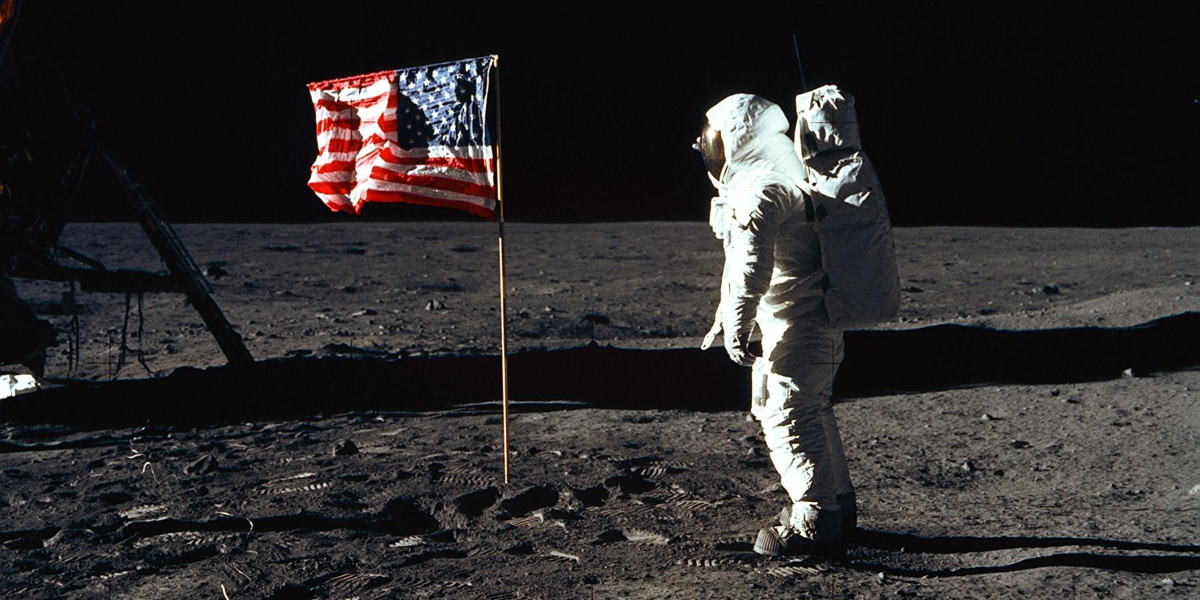 Celebrating the 50th Anniversary of Apollo 11

50 years ago today, Apollo 11 blasted off from Cape Kennedy carrying astronauts Neil Armstrong, Buzz Aldrin, and Michael Collins to the moon. 5 days later, Armstrong and Aldrin would successfully land their Lunar Module “Eagle” on to the lunar surface while astronaut Michael Collins remained in lunar orbit aboard the Command Module “Columbia”. And Neil Armstrong would become the first human to walk on the moon.

Even though Apollo 11 was an achievement to be celebrated by all of mankind, Apollo 11 marked the climax of the space race between the United States and the Soviet Union. The United States beat the Russians to the moon and achieved the goal set forth by President John F. Kennedy in 1961 of successfully landing a man on the surface on the moon and returning them safely to Earth. While on the lunar surface, Armstrong and Aldrin spent nearly 2.5 hours outside the Lunar Module where they collected 47.5 pounds of moon rocks to bring back to Earth and taking lots and lots of photos among other experiments such as deployment of a solar wind composition experiment, seismic experiment package and a Laser Ranging Retroreflector. Upon returning to Earth, the Apollo 11 astronauts had to fill out a customs form to declare the moon rocks they brought back – marking the end of their historic mission after their Command Module splashed down in the Pacific.

I have pulled together a bunch of ways to celebrate Apollo 11 on the anniversary of the historic mission this week:

Be sure to check out all the events NASA is putting on this week to celebrate the 50th anniversary of Apollo 11!

The 1,087-piece LEGO set of the Apollo 11 Lunar Lander “Eagle” is one of the most amazing LEGO sets I have ever built. It’s highly detailed – including separate ascent and descent stages, gold-colored landing pads and panels, opening camera and laser hatches and a ladder, brick-built video camera and laser reflector. And as you build the Lunar Lander, you get little factoids about the spacecraft! Totally worth $99.

Director Todd Douglas Miller takes newly discovered 65mm footage and more than 11,000 hours of uncatalogued audio recordings along with interviews with astronauts and other NASA personnel to take you through the entire Apollo 11 mission from blast off to splash down. This movie is absolutely stunning in HD and if you have a good sound system, it’s even better. I highly recommend this movie for anyone who wants to get a genuine and authentic look at Apollo 11 with amazing visuals and audio.

Apollo Expeditions to the Moon (Amazon):

This is an official NASA publication re-released for the 50th anniversary of Apollo 11. You get interviews with astronauts as well as colored and black and white diagrams of the technology used in the Apollo missions.

From the Earth to the Moon (Amazon)

This HBO 12-part mini-series aired in 1998 and was co-produced by Ron Howard, Brian Grazer, Tom Hanks. It tells the story of the Apollo missions starting with the Mercury and Gemini missions. They just released an updated Blu-ray version of the mini-series that has been re-mastered in HD. What I really love about this mini-series is that it highlights the stages and goals NASA needs to achieve in marching toward landing a man on the lunar surface. Getting to the moon took a lot of testing. Each Mercury, Gemini, and early Apollo missions were meant to complete certain goals prior to Apollo 11 getting to the moon. I highly recommend this mini-series if you want a fantastic overall look at the space program of the 1960’s and early 1970’s.

My copy of this just arrived today and this is what I’ll be watching for the rest of the week after work!

Apollo 11 Had a Hidden Hero – Software:

The Wall Street Journal has done an article today about the software behind Apollo 11. The computer behind Apollo 11 was the first digital general-purpose, multitasking, interactive portable computer and only had about 145K lines of code! I know this article is behind a paywall but its worth checking out – I promise!

Oh and by the way – if you’re a programmer, you can check out the original source code for the Apollo 11 Guidance Computer (AGC) here on GitHub!

Download the code from GitHub and view it in Visual Studio Code!

Take a real-time journey through the first landing on the Moon with original historical mission material!

Destination Moon Exhibit at the Museum of Flight:

At the Museum of Flight here in Seattle, the Destination Moon exhibit showcases real artifacts from the Apollo 11 mission – including the actual Apollo 11 Command Module “Columbia”. I had a chance to visit the exhibit and was blown away from seeing the Command Module. In addition to the Command Module, the exhibit features all kinds of other artifacts including an actual moon rock, space suits, and tools. If you’re in the Seattle area – this is a must-see exhibit. It’ll be here until September.

Have fun celebrating Apollo 11 this week!