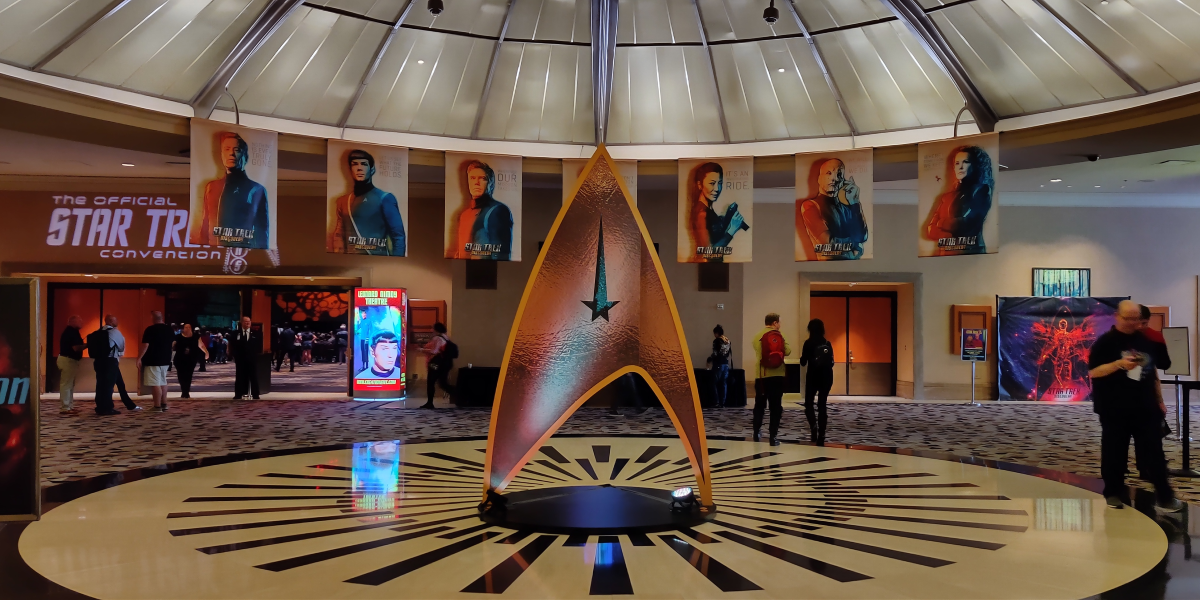 Earlier this month, I made a quick trip to the Official Star Trek Convention in Las Vegas. I made the last-minute decision to go in mid-July which didn’t give me a lot of time to plan so I ended up making it a day trip. The plan would be for me to fly out from Seattle early Saturday August 3rd and then fly back home that evening. I normally don’t do things like this – especially solo travel to a big convention. My social anxiety normally kicks in. And it did a little bit. But I felt it was important to go this year due to the ongoing promotion from CBS for the new Star Trek: Picard series and the upcoming 3rd season of Star Trek: Discovery. I also wanted to stop by to see/meet several vendors who would be at the show who develop Star Trek products I collect. And finally, I wanted to meet some of the actors. With lots of encouragement – I didn’t let my social anxiety win. I went and had a ton of fun and I wanted to share some highlights!

The event was held at a small convention center at the Rio in Las Vegas. It was easy to get my bearings on where things were at as the area wasn’t that big. There were two large ballrooms: one for the main stage events and the other for the vendor expo. There were smaller rooms dedicated to smaller sessions, a place to grab a drink (“Quark’s Bar”), and a few rooms for exhibits and showcases. CBS had a room for the Jean-Luc Picard “The First Duty” exhibit and there was also a room for a Roddenberry VR exhibit. The hallways were decorated with artwork celebrating the 40th anniversary of Star Trek: The Motion Picture (the very first theatrical Star Trek film from 1979) and places to take photos in staged sets such as Borg Alcoves, a Transporter Room, and a Terran Empire Agonizer Booth. There were a lot of people in a wide range of ages and a lot of amazing costumes. I saw young kids with their parents and retired couples – all dressed up together as their favorite Star Trek characters. It was very impressive. And even though there was a lot of people, it didn’t feel too overwhelming like big conferences tend to do for me. But maybe the Romulan Ale helped.

CBS brought the same Jean-Luc Picard exhibit they had at SDCC to this convention and it was the very first thing I did when I got there. I literally went straight there. I really wanted to see this exhibit. It takes you through the career of Picard from his early years in Starfleet through his cadet years to commanding the Stargazer and then this his years as captain of the Enterprise. You get to see Picard’s various uniforms over his years of service, as well as mementos from his adventures such as the Ressikan flute from the Star Trek: The Next Generation episode “The Inner Light” and Kurlan naiskos given to Picard from Professor Galen in the episode “The Chase”.

Finally, the exhibit ends with a peek at Picard’s attire from romping around his family’s vineyard in La Barre, France after retiring from Starfleet and what we’ll see him wearing in Star Trek: Picard. And Chateau Picard wine.

Jonathan Frakes, Jeri Ryan, and Jonathan Del Arco were on the panel to talk about the new series. We know Jonathan Frakes is returning at Riker (in addition to directing two episodes), Jeri Ryan is returning as Seven of Nine, and Jonathan Del Arco is coming back to the role of Hugh. There wasn’t a whole lot of new things talked about on the panel, most of it was things we already heard from SDCC the week before. They re-played the trailer which I had already watched a thousand times but loved seeing again. Everything around the new Picard show is surrounded by secrecy so that fans will be surprised and delighted when they watch the show. To illustrate how tight security was at protecting elements of the show, Jonathan Frakes was wearing a t-shirt that said “Don’t ask me, I signed an NDA!”

There were two things that struck me while watching the panel despite the lack of anything new. First – the chemistry between Jeri and Jonathan Del Arco is awesome. I really loved watching them go back and forth and I truly hope their characters interact in the new show with the same energy. I call them “Borg Besties”:

You guys are like Borg Besties and it’s glorious.

Second – the highlight of the panel is Jonathan Frakes describing an interaction between him and Patrick Stewart after shooting a scene for the show that has all the feels:

“And Patrick says: ‘I think we have done it, Johnny.’ And I said: ‘I think so too.’ So, we walk and it is just the two of us. The entire company of 150 people have moved on to the next set, which is in another part. And he says ‘Is there anything better than spending the day with filmmakers who know what they are doing and be able to work with people you love?’”

Teaching with Trek – Engage with STEM

Bobak Ferdowsi, Brandon Rodriguez, Danielle Nuding, Lyle Tavernier, and Tracy Drain from NASA Jet Propulsion Laboratory (JPL) did a session at the convention about how they got involved in STEM. STEM stands for science, technology, engineering and math. The scientists talked about ways to help students develop skills in the disciplines of STEM. And they took questions from the audience about working in STEM and offering advice to some of the young people there. I absolutely loved seeing this session. Seeing parents bringing their kids to this convention and then prioritizing sessions like this one really made me smile.

When I decided to go to this convention and make it a day trip, I knew I couldn’t do everything and see all the actors. To make the best out of the trip, I was very specific on who I wanted to see, and Mary Chieffo was at the very top of the list. In case you don’t know, Mary played the kickass Klingon Chancellor L’Rell (or “Mother”) on the last two seasons of Star Trek: Discovery. I believe that L’Rell is probably one of the best female Klingons we’ve ever seen on any Star Trek series or movie and its because Mary is such an amazing actress. She took how the writers wrote the character in the show and made L’Rell really stand out. It’s like what Andrew Robinson did with Garek on Star Trek: Deep Space Nine. I’ve been following Mary on Twitter ever since Season 1 of Discovery and she’s been great about engaging with fans including myself. Meeting her in person was wonderful! And yes – she’s very tall. I am looking forward to seeing her in other roles in other TV shows and movies.

Anson Mount as Captain Pike has been one of most favorite things about the second season of Star Trek: Discovery. Anson’s Pike represents exactly how a Starfleet captain should be and how they represent the values of Starfleet and the Federation. I think this quote from Captain Pike from the episode “Through the Valley of Shadows” summarizes exactly who Pike is:

“You are a Starfleet Captain. You believe in service, sacrifice, compassion, and love.”

In going to the convention for just the day, I didn’t anticipate getting to meet any of the other actors outside of Mary. But there was a small moment where the line for Anson wasn’t very long and my gut told me I’d regret it if I didn’t take advantage of the opportunity. So I got in line. And… I got to meet him! I have Captain Pike’s autograph! In support of Anson, I also want to mention he does a podcast too that I think you should check out.

There were a handful of vendors I wanted to see at the convention and ANOVOS was #1. All my Starfleet uniforms come from them and I’m a big supporter of the company with lots of cool stuff on order – including a Star Trek: Discovery command uniform. Sadly, they did not have their Discovery uniforms on display at their booth. While at their booth, I did get to check out their Star Trek Nemesis Type II Hand Phaser as well as the Star Trek: Discovery Phaser and Phaser Rifle. I’ve got the Discovery Phaser on order. These props are incredibly accurate and include LED lights and working buttons.

Special shout out to ANOVOS’s John Cooley who I finally got to meet in person at their booth. John’s been absolutely fantastic in talking about ANOVOS’s Star Trek products.

Eaglemoss produces a huge collection of miniature models of Star Trek starships from across all the Star Trek TV shows and movies. And I’ve collected nearly ever single starship they’ve released so far since early 2014. They announced new starships for their Discovery line and new starships from their main starships line at the convention. They had the new Klingon Raider from Discovery and the Scimitar from Star Trek: Nemesis on display which were incredibly detailed.

And they offered attendees the ability to purchase their new Akira Class U.S.S. Thunderchild model from their XL line. And I picked one up! The Akira Class starship design is one of my favorite starships design outside of the Enterprises and Discovery.

Shout out to Nils from Eaglemoss for taking the time to chat about starships.

Other Items of Note

I am so very glad I fought back my anxiety and pushed myself to attend this year’s Star Trek Convention in Las Vegas. I had a ton of fun and I met some of the actors and vendors I’ve always wanted to meet. And I got to experience the Jean-Luc Picard exhibit too. Upon reflection, I think I should have at least stayed one night so I could have enjoyed things without needing to be mindful of the time and getting back to the airport for my flight home. There were evening activities I might have enjoyed. I am seriously considering going next year!

And special thanks to Holly Amos for letting me tag along at the convention for a little bit! She is awesome!

NOTE: All pictures taken from the convention were taken using the OnePlus 7 Pro.