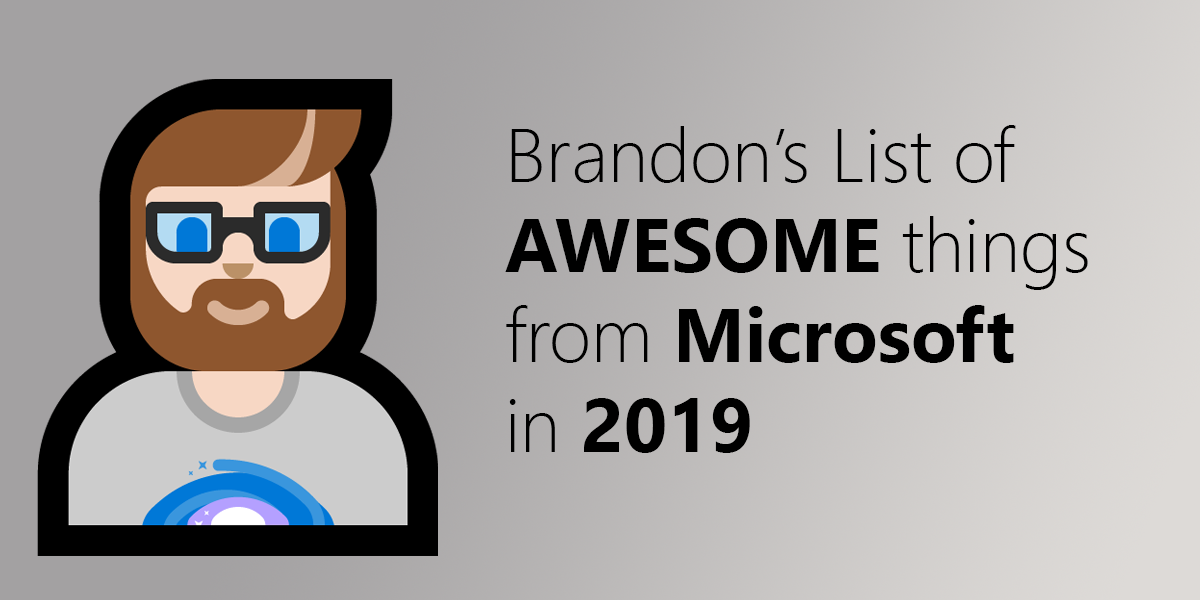 Over the holidays, I had a friend ask me about all the cool new stuff Microsoft announced and came out in 2019. I told him about all the things that stood out to me. This got me thinking about turning my own list into a blog post to share with others. I wrote a lot of this before New Years but never finished it. I wasn’t sure if I should go ahead and finish the list, so I asked Twitter and everyone said I should finish it and publish it – so here it is!

First thing’s first… Yes, I do work at Microsoft. But this is my own personal list and I wasn’t asked by anyone at work to make it. But because I do work at Microsoft, when say “we”, I mean Microsoft. The list here represents my opinion and not Microsoft’s. This list is also not organized by any sort of priority – either for me or for Microsoft. And if I forgot to mention something cool, it is the direct result of a short circuit in my specific individual brain.

I’m a “Windows guy” so of course I’m going to start off with Windows first on my list. In 2019, we shipped two new feature updates for Windows 10. We shipped the Windows 10 May 2019 Update which contains a bunch of new features including Windows Sandbox and a OS-wide new light theme. We also shipped the Windows 10 November 2019 Update which was a different type of update than we had done previously. The November Update contained new features such as notification control improvements and a quick way to add events to your calendar straight from the clock flyout on your Windows taskbar!

On January 15th, 2020, we officially released a stable version of the NEW Microsoft Edge! Curious as to how we’ll start the automatic rollout for the new Microsoft Edge? Read all the details here. You can also continue to try out Canary, Dev, and Beta versions of Microsoft Edge here from the Edge Insider site.

We made a lot of new hardware announcements this year.

Last February, we announced the Microsoft HoloLens 2 at Mobile World Congress in Barcelona. The HoloLens 2 is shipping to customers right now. The HoloLens 2 more than doubles the field of view from HoloLens 1, while maintaining the industry-leading holographic density of 47 pixels per degree of sight.

The Azure Kinect Developer Kit was announced along with the HoloLens 2. It uses the same new time-of-flight depth sensor from the HoloLens 2, high-def RGB camera and a 7-microphone circular array. The Azure Kinect allows for development of advanced computer vision and speech technology. For developers who have been using the Xbox Kinect to develop solutions for things that sense the people and things around and listens audio should definitely give the Azure Kinect DK a look!

Back in April, we announced more about the new Surface Hub 2s.

And in a small event in October in New York City, we announced the Surface Pro 7, Surface Pro X, and Surface Laptop 3. At that same event we also unveiled two new Surface devices coming in 2020 which I’ll talk about at the end of this post. I got to attend this event in New York and sit with fans of Microsoft, Surface and Windows 10 and their energy and excitement was so contagious that afterward I felt like I could fly to the moon. It was the first time attending a major Surface event for Microsoft and it was amazing. My current daily PC in the Surface Pro X.

From a PC accessory perspective – we announced and released a new version of the Microsoft Pro IntelliMouse.

Eagle-eyed fans also noticed that many of our Microsoft Keyboard products were refreshed to include an emoji key and Office key too! I’m looking to pick up both the new Microsoft Pro IntelliMouse and updated Microsoft Bluetooth Keyboard from the Microsoft Store very soon.

The Xbox One S All-Digital-Edition

Announced back in April, the Xbox One S All-Digital-Edition offers disc-free gaming. This console doesn’t have a disc drive for any physical media. It’s a console that was created for gamers who prefer to find and play their games digitally and are looking for the most affordable way to play Xbox games. And it does 4K entertainment with movies and TV from the Microsoft Store, Netflix, Amazon Prime Video and more. This console gets even better for gamers with Xbox Game Pass.

We announced the second-generation Xbox Elite Wireless Controller in June and it hit stores in November. The Xbox Elite Wireless Controller Series 2 is the world’s most advanced controller and brings over 30 new ways to game. You can customize this controller to be exactly what you want it to be to help you game – whether it’s playing Halo or racing in Forza. I have the Series 2 controller and absolutely love it. I especially love that it has a built-in rechargeable battery that gets up to 40 hours of battery life per charge. And it also comes with a USB-C cable and charging dock, giving you multiple options for charging your controller.

It’s important for us to enable gamers to play together which means cross-platform play and cross-network play across Windows 10 PCs and console. But there are gamers who just game on PC. In 2019, we delivered a bunch of new things to make gaming on Windows 10 better.

We introduced a completely updated/over-hauled Xbox Game Bar in Windows 10. Just by using the Windows key + G keyboard shortcut in Windows 10 gives you direct access to your Friends, Chat, Mixer, and Looking for Group (LFG) from Xbox Live. And you can share screenshots from your game to your social network on Xbox Live too or Twitter.

And we also released the Halo: Master Chief Collection for PC! Yes – you can play Halo on your PC!

One more thing… Microsoft Flight Simulator is coming back!

We announced Project xCloud in late 2018 and in 2019, we kicked off the Public Preview. Project xCloud allows you to play some of your favorite Xbox games on your phone powered by the cloud! I have been playing Halo on my OnePlus 7 Pro and its amazing. You can buy a clip for your Xbox Wireless Controller and clip it to your phone.

Additionally, we also started a preview for Xbox Console Streaming in 2019 too!

In late 2018, we announced we would be updating the icons in Microsoft Office. And in 2019, those updated icons showed up in the product. These new icons have hues that are bolder, lighter and friendlier but keeps the unique and identifiable symbol for each of the Office apps within the collective suite. Both our fans and customers have responded really well to these new icons for Office so we scaled up our icon design efforts to redesign over a hundred icons across the Microsoft ecosystem.

As part of this effort, we also unveiled a new icon to represent the new Chromium-based Microsoft Edge and the new Office Mobile app:

I love these icons. I love the design and I especially love the colors.

We also took a giant step forward in aligning the mobile experiences across all the Microsoft apps with a coherent design. This means bringing Fluent Design to our mobile apps across platforms – not just Windows.

For those who rely on command-line tools and shells like Command Prompt, PowerShell, and WSL, we introduced Windows Terminal at the Microsoft Build conference last year.

Windows Terminal brings all the command-line goodness you want into a single app with a tabbed user interface which can be customized to exactly how you want it. Windows Terminal uses a GPU accelerated DirectWrite/DirectX-based text rendering engine so the text looks amazing.

And we even developed a brand-new font for Windows Terminal – called Cascadia Code!

At Microsoft Build in 2019, we announced we were bringing back PowerToys and we released the first set of these new PowerToys for Windows 10. PowerToys were popular back in the 90’s with Windows 95. The first release of the new PowerToys had two PowerToys: a Windows key shortcut guide and a window manager called FancyZones. The second release contained the PowerRename PowerToy. And more PowerToys are coming!

Your Phone had an incredible year of improvements. By linking your Android phone to your PC with Your Phone, you can access your text messages and photos, receive notifications from your phone on your PC, AND answer phone calls! And we also announced a partnership with Samsung that includes integrating Your Phone into their latest Galaxy Note 10 devices – including the feature of mirroring your phone screen on your PC!

My colleague and all-around super awesome Morgan M. Mitchell put together a series of blog posts in December highlighting all the Azure Developer announcements and releases we’ve had in 2019. If you’re a developer and coding anything using Azure – I highly recommend checking out her blog posts!

Coming from Microsoft in 2020

We have a lot of amazing new things coming in 2020 – especially Holiday 2020. At our October Surface event, we announced two new foldable Surface devices: Surface Neo and Surface Duo. The Surface Neo will run a new flavor of Windows 10 called Windows 10X that has been designed specifically for foldable devices.

And the Surface Duo will run Android.

In addition to those new devices, we also announced the brand-new Xbox Series X console that will be the fastest and most powerful gaming console.

And we’re finishing up the upcoming new feature update for Windows 10 (version 2004) that includes new features like Windows Subsystem for Linux (WSL) 2.0 and Virtual Desktop renaming.

So that’s my list – if you think I’ve forgotten something really awesome from Microsoft in 2019, let me know in the comments below or tweet at me!