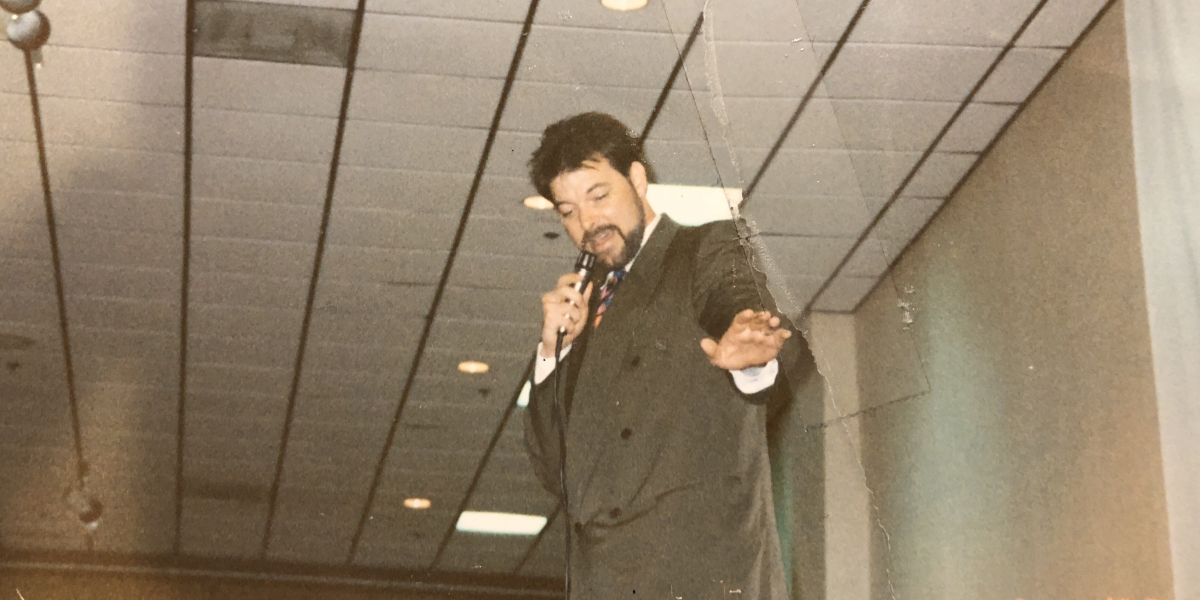 As I continue to self-isolate and stay home during the ongoing COVID-19 pandemic, I was going through some old photos and found photo shown above from my very first Star Trek convention from 1992 and it had me reminiscing about my experience. I thought it would make for a good blog post.

Back in the early 90’s, at the peak of Star Trek: The Next Generation’s popularity, Creation Entertainment was regularly putting on Star Trek conventions around the U.S. where you could go and see the actors from the show. My mom signed up to be put on a “mailing list” at the time where we would get brochures in the mail advertising any conventions that would hit our area (I grew up outside Portland, OR) and how to get tickets for these upcoming conventions. I loved getting these brochures in the mail. These were also the days of Starlog Magazine and these conventions were advertised there too but I wasn’t getting issues of Starlog regularly.

In 1992, I was a 9-year Star Trek: The Next Generation fan. I had a HUGE collection of Star Trek toys from Playmates. I also carried around my copy of the Star Trek: The Next Generation Technical Manual everywhere. To be going to a Star Trek convention was a dream come true. Looking back, I think Jonathan Frakes was the perfect actor to see in person. He came on stage with some much energy and friendliness. He had such a big smile. He told stories about what it was like working with the rest of the cast of the show (and the pranks they all played on each other), what the sets were like, and insight to his approach to the character of Riker. He did one hell of a Patrick Stewart impression and told a lot of jokes that had the audience laughing. And he talked about how much he valued coming to conventions and interacting with Star Trek fans in person. Having this experience as a kid also reinforced that these were actors playing characters on a TV show and the actors are often not like their characters they play on the show. As I listened to Jonathan talk, I heard Jonathan – not Commander Riker. Then he shouted “Shields up! Red Alert!” and I heard Commander Riker. I will say that after seeing Jonathan speak in person – I had a new-found appreciation and love for the character of Commander Riker. One thing that stood out most about Riker was his undying loyalty to Captain Picard and the Enterprise. That sense of loyalty is something I chose to adapt in my own life with family, friends and colleagues.

While seeing Jonathan Frakes in person was the highlight of my first Star Trek convention – I also got to interact with fans. There was a gentleman who sat next to us in the audience who made his Star Trek II: The Wrath of Khan Starfleet uniform from a uniform pattern he purchased at a Star Trek convention many years prior. The uniform looked exactly like it did in the movie. I was so amazed. I wanted a real authentic looking Starfleet uniform so bad! My parents purchased the uniform pattern for the Season 1 TNG uniform and had uniforms for me and my brothers made (I’m saving this story for another blog post). Additionally, walking around the exhibit hall was complete nerd heaven. There were prop makers there who made props that looked exactly like they did on the show with lights and sound effects! I held what felt like a real working Tricorder.

I had a lot of fun looking back on my first Star Trek convention. Since then, I’ve attended several including one with Kate Mulgrew (Captain Janeway) and most recently the 2019 Star Trek Convention in Las Vegas.