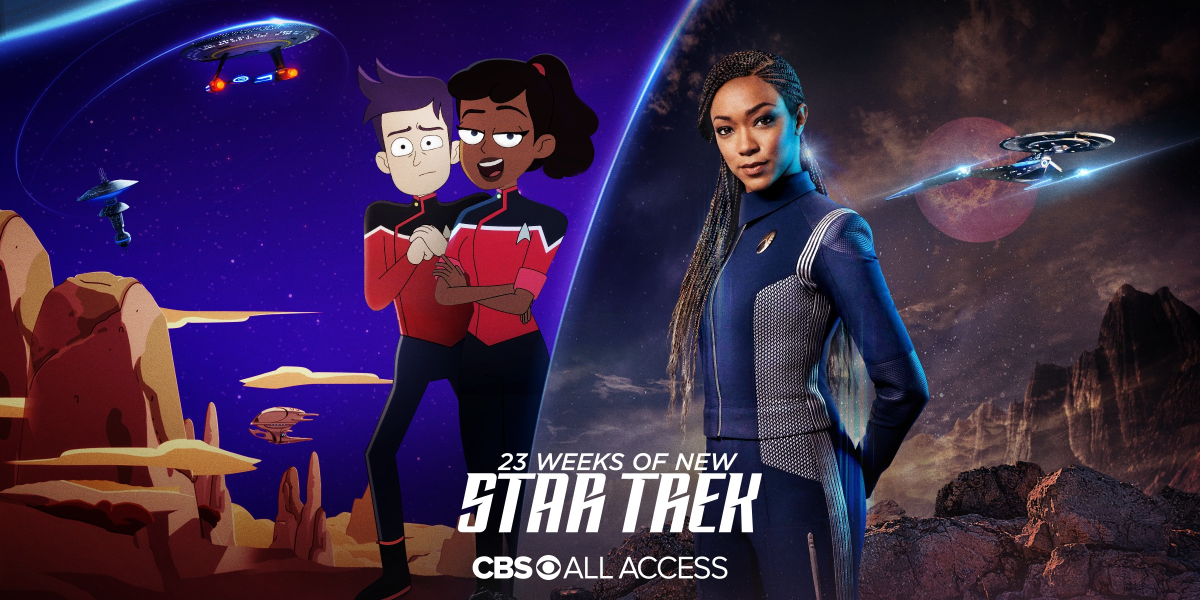 First up is Star Trek: Lower Decks. Lower Decks is a brand new animated Star Trek show from Mike McMahan who wrote some Rick and Morty and is the co-creator of Solar Opposites on Hulu. It’s a more adult-focused animated show like Rick and Morty is. Lower Decks takes place aboard the U.S.S. Cerritos which is Starfleet’s “least important ship” and specializes in “second contact”. The show is centered around the “lower decks” crew of the Cerritos: Ensign Beckett Mariner, voiced by Tawny Newsome, Ensign Brad Boimler, voiced by Jack Quaid, Ensign Tendi, voiced by Noël Wells and Ensign Rutherford, voiced by Eugene Cordero. Remember that episode in the 7th season of Star Trek: The Next Generation called “Lower Decks” that focused on some of the less important junior officers aboard the Enterprise-D? This show plays off that concept.

After other more important starships in Starfleet make first contact, the U.S.S. Cerritos will go in and pick up where they left off. And that’s where the hilarious adventures begin! We are told to expect a lot of nerdy Star Trek references (especially things fans of TNG pick up on) and even some appearances of some familiar Star Trek characters. We will also see the Ensigns interact with the Cerritos bridge crew which includes Captain Carol Freeman, voiced by Dawnn Lewis, Commander Jack Ransom, voiced by Jerry O’Connell, Lieutenant Shaxs, voiced by Fred Tatasciore, Doctor T’Ana, voiced by Gillian Vigman and Chief Engineer Lt. Commander Andy Billups, voiced by Paul Scheer. Lower Decks takes place right after Star Trek: Nemesis in 2380. Yes, that’s right – even though Lower Decks is animated, and more comedic, it fits right in with established canon.

I absolutely adore Rick and Morty and really enjoyed Solar Opposites so I am really excited for this show. Based on what I’ve read from Mike McMahan, he seems to get Star Trek and the importance of respecting Star Trek but at the same time mixing in humor that will make this show fun to watch. I laugh my ass off watching Rick and Morty and now more than ever I need laughter so this show is hitting at the perfect time. A mix of humor and Star Trek and fantastic animation is just what I need.

Star Trek: Lower Decks will run for 10 episodes and then in October, we’re going to get the 3rd season of Star Trek: Discovery!

At the end of Season 2, the U.S.S. Discovery and crew follow Commander Michael Burnham into a wormhole that will take them 900 years into the future. Season 3 picks up as they arrive in the future. This places Discovery hundreds of years after all the Star Trek we know today. What is the state of the Federation and Starfleet? Is there even a Starfleet anymore? So many questions! We know that the crew of Discovery get new badges…

I have fallen in love with Star Trek: Discovery. I love the characters and the actors that portray them. I love the writing. I love the set design. I plan on expanding more on my love of the show in a later blog post. But I can’t wait for Season 3!

I am a very happy nerd that we have 23 weeks straight of new Star Trek.